wardytron and I have been back from Zakynthos/Zante a week now. Sigh. The holiday was brilliant and fantastically relaxing and just what we both needed. It was deliciously hot and far away from all the gloomy things. I found us an all-inclusive late deal at a posh-ish hotel near a shallow, gentle bit of the coast. All-inclusiveness made it easier for us to budget for it; it's not something I'd normally do, especially in Greece. The hotel was pretty good, and I'd specifically chosen one that was mainly frequented by Germans, Poles and Italians (with a few Frenchies as well). On cheap sun holidays, hell is other British people. You could really see the difference at meal times, where the non-Brits collated structured meals from the hot and cold buffets, and many of the Brits just ate massive piles of meat and potatoes. I wish I could have photographed the look on the face of a Dutch woman, who had collected a plate of pork chops to put at the centre of the table for her whole family, and she passed an English bloke with a similar plate just for himself. All of his table were salad dodgers. All the really obese people were British and they were the only ones who let their children select a plate of chips and ketchup as dinner. They also wasted far more food than anyone else. At mealtimes it was vaguely embarrassing to be British. I didn't stint on food myself, I scoffed huge mountains of lovely island-grown salad drenched in tsatziki, loads of lamb and pork, and all the watermelon I could cram in my ravening maw.

I don't swim, really, I mainly bob about a bit, so selected Alykanas because the sea is gentle and shallow for a very long way out. I didn't want big scary waves and surfers. Big waves terrify me and I don't like surfers; they're usually insufferable twuntish hippies. The only bad thing about using a mooncup doodad is that I no longer get to flush away a really jammy tampon with the hope it'd somehow end up smacking some smug surfer in the gob.

The only problem with the trip is that my primeval ancestors were obviously scaly-skinned stalwarts that basked on rocks and that Wardy's primeval ancestors were slimy, pallid weaklings that lived under rocks. He really doesn't thrive in 35 degree heat. He doesn't tan either, he just gets red, sweaty and flustered. I tan marvellously, don't sweat and stride about in the heat without a care. A decent tan knocks years off my face and conceals the varicose veins in my legs. I was bimbling about in the hotel room, post refreshing lie-down, with freshly washed hair and a sheet wrapped round me and Ward told me I looked like Aphrodite, apparently: 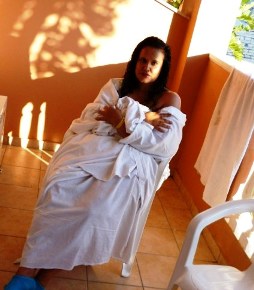 A day later he was festering about the room groaning and sunburned, pathetically declining a refreshing lie down because it was too darned hot, apparently, and I told him he looked like a boiled sheep's head. I was too ashamed kind to take a photo of him in that state, but took one of him later, enjoying some of the delicious local elixir: 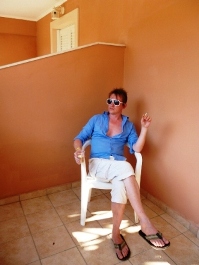 We spent a lot of time on the beach. Andrew made a sandcastle (check out that unwholesome pallor): 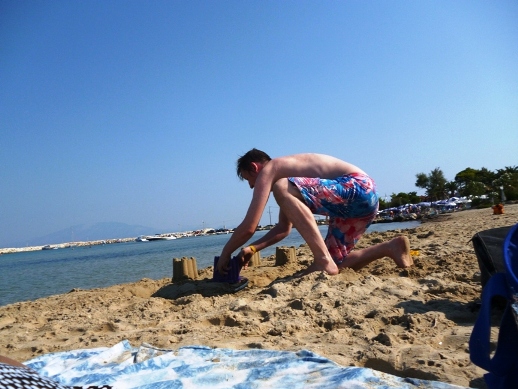 The hotel was surrounded by a vineyard and various goats, and we had to pass lovely old olive groves on our walk to the beach about a kilometre away. How my dodgy joints loved bimbling about in that heat. 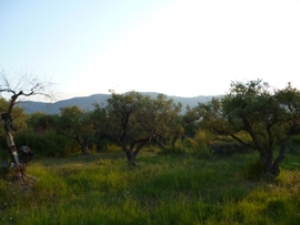 I deliberately picked a less developed area, and a lot of the development was shut, half-empty or decorated with big 'To let' signs. Gloomy indeed for the Greeks, but great if you want a quieter holiday.

The Ionian islands are much greener than the rest of Greece, and the Italians called it the island of flowers. This pretty fellow and about a dozen of his chums were fluttering about one afternoon when I bimbled back to the beach while Andrew had a snooze. 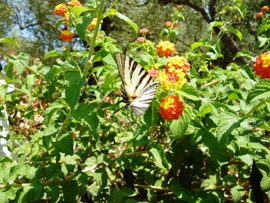 We didn't do much touristing, because there isn't really all that much to see in the way of history in Zante. Pretty much every building on it was destroyed in the earthquake in 1953. It's got lots of natural beauty and would be a brilliant - though terrifying - place to explore by car. Andrew hadn't swum in the sea for over a decade, and loved it, so we booked a boat trip with the opportunity to do some deep water swimming. The only problem was that you had to jump off the boat to do it, and he was a bit too alarmed by this prospect (I wouldn't have done it at gunpoint). This meant we spent three and a half hours on the hottest day we were there on a boat, roasting. I loved it, but the poor boy fried. Happy Jane: 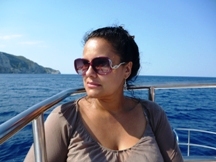 One of the sad things about Zakynthos is that this crappy rusted tanker is its biggest tourist draw. It was run aground deliberately, apparently. I just couldn't see the appeal. The beach is lovely, but there was a traffic jam of boats dropping tourists off and it was all a bit ghastly, really. 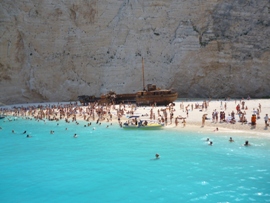 I can't help thinking that having 'magic world' emblazoned on your arse is false advertising. 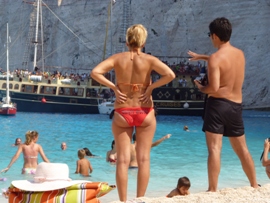 These are the lovely Blue Caves. That luscious rich turquoise is due to reflections from the white walls of the caves and through the sea on some interesting bug action below. If we'd had more dosh, we would have hired a tiny boat to take us closer into them, instead of being stuck on a big one. 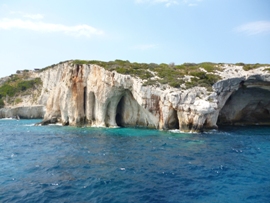 Poor Andrew was boiled by the time we got back to land, and flaked out in a lovely bar. Then I sent him to do the 2km round trip back to the hotel in the afternoon sun to fetch my swimming costume so I could have a cooling swim. 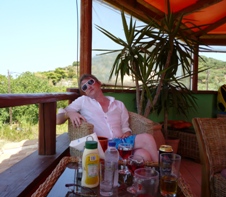 The only other vaguely cultural thing we did was to take the early morning bus to Zakynthos town. There were lots and lots of empty restaurants and cafes, and even more businesses with 'to let' signs on them than in our little resort. Greece at the moment is very cheap, but not very cheerful. We ambled round the Museum of Post-Byzantine Art, which was very small. Andrew was exasperated by just how long it took me to take this picture. 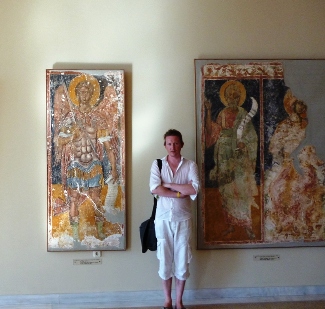 I like this saint. He's got a big black crow. I convinced Andrew to amble up the huge steep hill behind the harbour so we could look round the ruins of the Venetian fort. At midday, in 36 degree heat, with some of it 1/3 gradients, this was perhaps somewhat ambitious. I managed it comfortably despite - probably because of - the heat, but poor A scuttled desperately from patch of shade to patch of shade, like Gollum in search of his Precious.

I like this campanile. Foreign churches have funny, tinny-sounding bells, don't they? 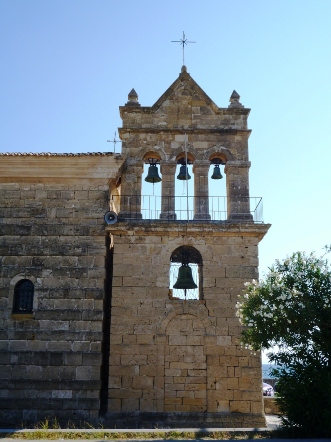 The view from the top of the hill was lovely, and worth the stroll. As were the lemonade and beer we groaned in delight over at the cafe where I took this pic. 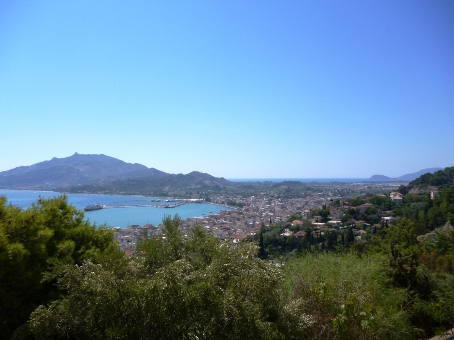 I shall, I promise, explain more about the Sri Lanka offer etc, soonishly.
Collapse